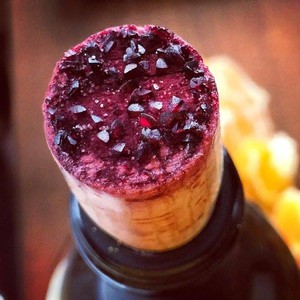 Wine crystals are relatively misleading to those who are unfamiliar with them. It  is often believed that these crystals are hardened sediment, cork rot, or broken  glass fragments from the bottle itself. As it turns out, these beautifully formed  crystals are anything but the aforementioned.

The crystals in question are actually what is known in the wine community as  tartrate crystals and often referred to as “cream of tartar,” “wine crystals,” or  “wine diamonds.” These crystal deposits form on the cork of a sealed wine bottle  when tartaric acid and potassium, naturally found in all grapes, are bonded  together during exposure to extreme temperatures, a process known as cold  stabilization.

Cold stabilization extracts potassium bitartrate from the wine itself and helps to achieve flavors and aromas in wines. However, it should be noted it is important not to allow the wine to be exposed to such an extreme temperature for too long as the process has the potential to completely strip the wine of all aromas and flavors.

Many who find wine crystals in their wine should not be worried. The presence of the crystals pose no threat to the quality of the wine itself nor do they alter the flavor of the wine once the processing is complete. Consuming wine crystals is completely safe as well and possesses only a slightly bitter aftertaste when chewed.

Some wine lovers may find they are not keen on seeing the crystals in their wine. If seeking a way to remove the wine crystals, wine makers advise using cheesecloth to strain any unwanted diamonds or decanting the last quarter-bottle of the wine itself.